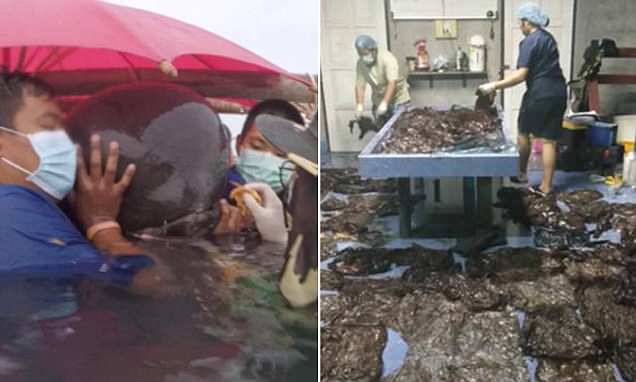 Whale Dies in Thailand with Eight Pounds of Plastic Bags in Stomach. In the south of Thailand, a whale died after swallowing more than eighty plastic bags, so those responsible announced Saturday after a futile attempt to save the mammal.

Thailand is one of the countries of the world that use most plastic bags, causing hundreds of marine animals to die each year living near the busy beaches of the country.

A young male whale is the youngest victim found to be moribund at the border with Malaysia, the competent ministry stated. A team of veterinarians tried to save the whale, but in the end, he died on Friday, according to the report.

According to the autopsy, the animal had eighty plastic bags in the stomach weighing about eight kilos, the ministry emphasised. The whale spewed five plastic bags during the rescue operation.

The bags prevented the animal from taking other food, according to Thon Thamrongnawasawat, a biologist at Kasetsart University in Bangkok. At least 300 marine animals, including whales, sea turtles and dolphins, die every year in Thai waters after swallowing plastic, the biologist explained.

How to Be Successful in E-Commerce Market Dominated by Big Players?